The Rise, Fall, and Resurrection of Keurig 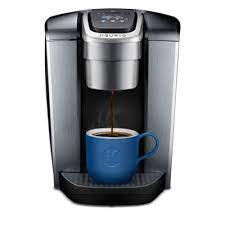 At the beginning of the week the Schmaing clan had a great catastrophe in our household.  As usual I awoke early in the morning to participate in my morning ritual of worshiping at the Holy Coffee Altar, followed by the sacred Morning Dancing.  However, as I was proceeding with the Coffee portion of my morning ritual the Altar at which I obtain the Holy liquid from sputtered once, twice, then drew it's last breath and died.  My Keurig machine was no more.

I did a diagnostic on the Holy Machine followed by an autopsy.  It was dead and was not returning to do it's duty in magically transforming the Kcup into a fresh cup of Joe.  There was nothing I could do to bring it back.  As I am not a practitioner of the darker arts, I did not create a Zombie from my Keurig machine.  It was not wandering the kitchen in search of brains, nor was it creating an anti coffee.  It was dead.

I remember the day I purchased the holy machine.  It was in a box waiting to serve.  I unpacked it and offered up a first cup to the universe as a solemn vow to the Coffee gods.  It was a good machine and did it's duty for a couple of years.  I was happy and satisfied with it's performance.

The death of a Keurig comes quickly.  It doesn't linger, or take it's time. It happens all at once.  If I were a conspiracy theorist I might be inclined to think that the machines are created that way on purpose to get the coffee drinkers of the world to purchase a new one every couple years or so.  Over the lifetime of the average coffee worshiping person that could be as much as 4000 dollars in coffee machines, insidious.

Fortunately I was born well before the birth of the Keurig company.  When I started my worship of the Holy drink, I was but a child and coffee was made on stove tops in aluminum percolators, which are still used world wide and do make a pretty good bean.  Many altars the world has to the creation and filtering of Pejuta Sapa, (Black Medicine).

Reincarnation is a theme that follows many of the worlds religious.  Reincarnation is the base and beginning of the idea of resurrection.  The question then is, "How do I satisfactorily resurrect my Keurig machine?"  Some heavy duty Majick is called for.

The beginning if this resurrection was a trip to Walmart, where in a hidden corner of the store I found a duplicate model of the machine that had just died in front of me.  It was the same color, same controls, same reservoir.  It was an exact copy of the machine I had been using for the past couple of years.  So I bought it and brought it home just like a lost puppy.

Unboxing the new Altar to my coffee ceremony was the process of unveiling the new in the face of the old.  After I placed the old carcass of the past Keurig in the box of the new and placed it in a place for the Garbage truck to find on Wednesday's pick up.  All was good in the world.

Water is the substance that is supposed to be the indication of life on planets throughout our Galaxy.  I added to water to the Keurig and tested in by running the water through it.  A successful test was done, and more water run through it the first time it was operated.  To keep it holy a run of Coffee was passed through it and consumed.

This was the first cup of Joe I had since the beginning of my need for a new Keurig.  The Holy jolt was a much needed boost.  Again my space was back in balance.

Every two or so years I can look forward to a similar experience, the practice of the Rise, Fall, and Resurrections of the Keurig.  A metaphor of the communion and communication of all people influenced my the Holy Bean.  Thank You Keurig.