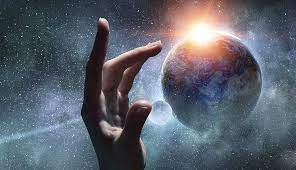 In the beginning there where 7 brothers.  Each had his own job of creation to contend with.  The eldest was the over seer of his younger siblings shinning the light of wisdom upon decisions as they came.  He would comment and have a little of his light in all that was done.  This was proper as he was the eldest brother.

The second oldest brother was responsible to collect the darkness and distribute it evenly across the  void.  He was a painter who's expertise was working with the blacks and whites mixed with subtle greys of pen and ink.

The third was the sound man.  He would ring out and check for the harmonies within the void as the creation was being distributed.  He was always conducting within and waiting for response, his work is ever changing.

The fourth was the holy drum who's heartbeat gave presence and a rhythm to all of creation.  The fifth was a builder of boxes.  These boxes he would distribute to the other brothers to help give order to their collective spaces.  The fourth would resonate his drums through them to direct the direction of the heart beat.  The third used the boxes as a grand resonator to focus his universal music.  Second used the boxes to created gaps within his painting creating a physical character through which energies would grow.  The Eldest brother gave the other four directions to work, a compass was formed.

Brother five began working on the firmament.  He was responsible for incorporating the elder four brothers creations into a working atmosphere for the light to shine through.

Brother six began creating worlds.  Great round stones of wonder.  Each with it's own distinctiveness and color, warm and cool, bitter and sweet. Creation was almost complete.

The youngest brother, Master Wu was a turmoil of movement.  His qi was moving throughout all of creation looking for a direction, non was found.  Wuji was growing and expanding moving faster and faster.  Wuji is chaos.

The eldest brother, wise and true, had his watchful eye on Wu as he traveled about howling into all he found.  Then a great idea came to his mind and he spoke to the other brothers, "Brothers." he said, "We have almost ended creation.  Let us begin the celebration at the end of creation to ring into the heavenly kingdom our true work."  And they did.

As the brother's partake of bread, and sacramental wine, they fed Master Wu much wine, and more.  Master Wu grew tired and fell asleep.  As he slept he began to dream.  He dreamt of great fields, He dreamt of great mountains, he dreamt of wonderous seas filled with bounty. The firmament surrounded his dream and all things he dreamt became alive.  Then Master Wu had one last dream, he dreamt of Man.  Mankind grew and populated his dream and civilization was born.  The eldest brother wise and powerful saw the beauty of Master Wu's creation and began feeding him wine on a regular basis.  Wu remained asleep and dreaming.

So you see, Mankind and the world we live is nothing but the dream of a drunken Immortal.