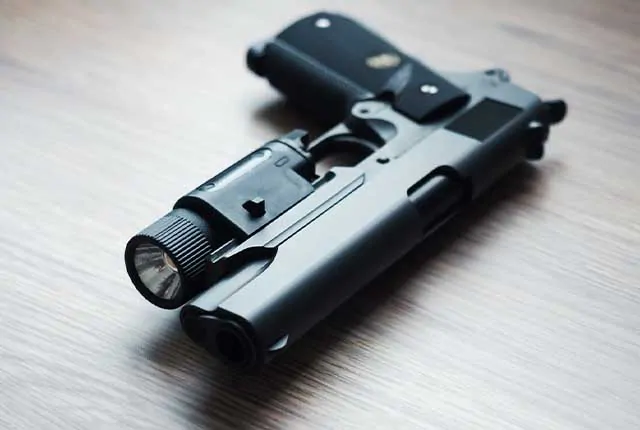 I used to be a pretty good shot.  I was employed by the Dept. of Defense and had to re-certify my skills every year.  We shot a lot, so I got fairly good at it.  It has been many years since I've been a real good shot.  Things like that tend to rust if you don't practice the skills necessary to keep the eye honed.  I however have since gone through some minor eye surgery and have a brand new lens in my right eye.  It's almost, "Bionic."  So I'm kind of curious if my shooting hasn't improved.

A couple of my bestest buds are very good shots.  One was employed by the same outfit I was, different branch, but has retained his prowess.  The other, well He grew up in the hills of Northern New Hampshire. Nuff said.  They both have offered to take me out shooting and help me regain my marksmanship.  I may take them up on the offer just cause I used to like shooting.

Sig Sauer is a New Hampshire based weapons manufacturer.  They create and build various types of hand guns as well as military style rifles for law enforcement and others.  Recently in the news it has come out that Sig Sauer's P320 handgun has a long history of being defective.  The main badness is that it shoots either prematurely or without the trigger mechanism being pulled.  According to the, "Stoddard Firm". a firm that specializes in catastrophic injury and death cases, the P320 has been the result of many injuries, some of them serious, and a few deaths due to it's defectiveness.

According to their website, Sig Sauer is refusing to recall the weapon and fix the problem or re-create a gun to replace it.  Now, I can understand the financial ramifications as just about every policing agency in the United States does business with Sig, but where's the responsible business ethic that we in this country are supposed to be proud of?  It seems the state of doing business in this government has deteriorated considerably.

The government has yet to step up and force the issue as well.  Even though some of our top policing officers from Washington are also carrying the P320.  Local Police Departments are beginning to investigate the weapon and possible new companies to purchase from. However, much of the damage has already been done and some long drawn out law suits are being filed, according to Stoddard.  A crying shame.

I may take up my friends on the lessons and improve my expertise, but I think I will stick to my ole friend the service revolver I got to keep after leaving Gov. service.  It works and is fairly indestructible.  I will not become a Sig Sauer customer.

Posted by John Schmaing at 8:37 AM