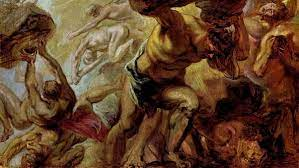 The Greek gods of old demanded that the humans love them and worship them.  Through this worship and subjugated love the gods subsisted and existed.  The day that people stop worshiping the gods and stop believing in them, they will die, or as close to death as a god can be, "disbelief."  When the people stop believing the belief stops being.

The King of the Gods is Zeus, and with the help of his other two brothers, Hades, and Poseidon, killed their father Kronos the Titan.   Kronos was guilty of eating his children for fear that someday one of his sons would usurp his throne and kill him.  Zeus implored Hades to create a beast so powerful and dangerous that it could destroy Kronos.   What it did was piss Kronos off and he devoured his children anyways.  Zeus fooled Kronos into believing that he had been eaten as well by feeding him a large stone.  When Kronos was sleeping Zeus cut him up into several pieces and tossed him into the pit of Tartarus. Then Zeus freed his siblings and became the King of the Olympian Gods.

The three oldest brothers, Zeus, Hades, and Poseidon, each split the Earth (Gaia) into three physical planes for each to rule.  Zeus, the King of the Gods, chose the Terra Firma, (the Lands and the Skies), Poseidon, was given by Zeus, the Seas of the Earth to rule and live, and Hades was given the Darkness and the Underworld.  Hades was not happy about this, He was jealous of Zeus thinking himself the deserver to be King.   Hades and Zeus argued about being King, Hades lost and Zeus banished him to his realm.

Each of these realms cannot exist without the others.  Take one away and the other two cease to exist. One thousand years after the Three defeat Kronos, Zeus creates humankind and then the real trouble begins. He creates an edict and forces humankind to worship the Gods.

Things went on pretty good until Lord Zeus started visiting Gaia and having relations with human women.  This really irritated his wife, Hera the Queen of the Gods.  Thus begins the era of the Heroes, and the beginning of the end of the Gods, yet another prophecy that should not be ignored by Zeus.

According to legend the sons of Zeus wander the Earth doing battle for causes that are Just and Righteous.   If the timelines are correct, we are still living in the time of Heroes, and because of our love of the story, the mythologies and tales of the old ways have kept the Gods alive and well.  The sons of Zeus are about to climb to the top of Olympus and Humankind also will reside with the Gods.  Then they will be our equals.

Posted by John Schmaing at 9:01 PM