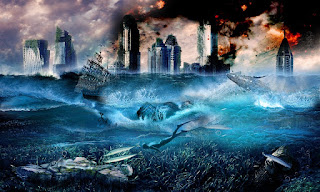 What fervor burns in the hearts of men?  What lament has made human kind what it is?  How have we collectively reached this point in our history where our world has taken up a war against us, her children?  It has recently been announced in the news, that the melting of the ice on Greenland will raise the water levels of the oceans by more than a foot.  Apparently it will happen and there is nothing we can collectively do to stop the melt, the damage has been done.

The powers of the globe look upon this catastrophe and still choose to ignore the truth that unveils before them.  Science has shown the leaders of the nations what will happen in the face of environmental global collapse, but the leaders have turned a blind eye, worrying more about the pockets of the wealthy and ignoring the welfare of the masses.

Answering the hubris of human nature, the Goddess, the Earth, is judging us and condemning us with our own maladies.  We are the victims of our own making.  The waters pour from Greenland because mankind has poured poison into the atmosphere of our Mother finely making it impossible for that atmosphere to heal the contamination through natural means.  We have unbalanced the natural order of the environment and that environment is shuddering, and the wake is going to clean the infection off of the face of Earth.  We, Humankind, is that infection.

If we take a hard look at the workings of humankind, our biological processes, and our relationships with each other as well as the planet, we will discover that humans are not a natural occurrence on the Earth. We are out of order in our space here, we are unbalanced beings in a balanced nature.  Nature without humans naturally balances itself.  The biological functions of the planet function in order. The environmental balances of the planet, without humankind, would function holistically and harmonically on it's own. Introduce humans in the mix, and the whole energy system of the environment unbalances and slowly starts feeding off itself in order to balance again.  Because we are not a natural part of this planet there is no natural balancing that can be done.  Only time is a recourse.  And ours is up.

In a few thousand years the new inhabitants of this realm will look upon the remains of a once great legacy of the past wondering who, when, and how it all stopped.  Just as we do today of the new past's we are finding.  Until we learn where we actually come from, and who we are, we are doomed to repeat this cycle over, and over.  Until we return to the Stars...

Posted by John Schmaing at 5:02 PM