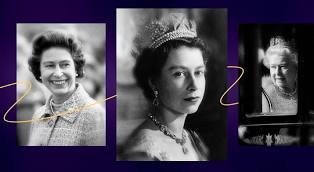 Occasionally in our world there are individuals that achieve greatness.  These people rise to a level that most of us can only aspire to.  We call these people, "the Giants."  They have become the new Nephilim.  Mortal, but more, beyond mortal, existentially Demigods.

We have just witnessed the passing of one of these individuals.  Elizabeth II, the Queen of England passed away quietly in her sleep less than a week after welcoming in the new British Prime Minister, Liz Truss into the political fold of Europe.  Lilybeth, as she called herself was strong and brite up to the last of her days here.  Behind her blue eyes one could see the smoldering of wisdom gained through age and a lifetime of practicing the art of people.  She was a Master.

Queen Elizabeth II was a longest reigning monarch in British history, ruling as Queen a total of 70 years, a mind boggling feat.  When she became Queen, sir Winston Churchill was her first Prime Minister.   We have to put that into context.  Sir Winston was one of the main actors in the defeat on Nazi Germany, and a major player in the downfall and eventual death of Adolf Hitler.  Sir Winston was a giant himself.  Elizabeth eventually overshadowed even him.

Harry Truman was the first American President that the then Princess Elizabeth met.  She stayed in the White House as a guest.  Her first meeting with a US President as Queen was President Eisenhower.  She has met with every President since then.  A true accomplishment.

Queen Elizabeth II, a giant amongst we mere mortals, will be remembered forever for her personable nature, her truth, justice, and ability to go with the flow.  I stopped short of writing and the American way because obviously, she was British, and that's Superman's thing.

Lilybeth, bon-voyage, we send you off into the light with Phillip.  Enjoy...

Posted by John Schmaing at 8:44 AM