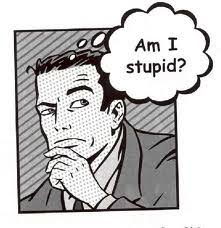 Ya know sometimes things happen around you and the only reaction that is appropriate is, "That was really Frigging Stupid."  After some time you will reach a saturation point for stupid and it will start oozing out of you as various comments, knee jerk reactions, and the urge to choke the shit out of the stupid one.  Unfortunately  most of the stupid in our modern world is perpetrated by "the Man."  If you're a child of a certain generation you will recognize the term, "the Man" as a reference to the establishment and governing authority.  It is they, "the Man" who initiates more stupid than any other, and this just pisses me off. You?

The first Stupid Thing we will indulge in is:  I was shopping at the end of my shift in, Wal Mart, for some minor needed things for home, snacks, eggs, water, to name a few.  When I visited the self check out; let's look at this for a minute.  The self check out is one of the stupid creations of Wal Mart.  Take the jobs away from competent checkers and rely on only minorly honest town folk.  People that would rob you blind in one instant then be your best friend in another.  This cost Wal Mart thousands of dollars and some rather interesting items.  Things like, Big screen TV's, computers, and hundreds everyday in food.  Then Wal Mart in their infinite wisdom decided to take regular citizens and give them the authority to go through the bags of shoppers and compare the findings with the receipt.  If they match you get to go, if they don't you are delayed and detained until the police arrive to take you to the poky.   By the way, this action is illegal.  However, Wal Mart seems to be getting away with it.  Maybe it has to do with the fact that Wal Mart is the largest business entity of it's kind on the planet.  That holds serious political clout. This is another Stupid Thing that pisses me off.

Anyways, I was at the check out checking my items, when I scanned a can of pressurized air that I had purchased to clean off some electronics.  The computer that scans items had a message pop up telling the clerk that watches these self check out things to make sure I was over 18 years of age.  That's when some of my tolerance oozed out and I said, "What, you have to be 18 years old to buy a can of Air!?"  This caused a round of laughter from other shoppers.  Another Stupid Thing.

An other thing that really gets me, especially right now, are the crappy negative political commercials on TV.  They fill us full of lies expecting us to vote for said candidate then they fill us full of more lies. These folks have big enough kehones to take it for granted that we'll all believe their Bull.  Yet another stupid thing.

As we mature in our lives we all go through several moment where an innocent bystander may get the incredible urge to choke the snots out of us, but he/she abstains to better judgement.  We have become one of the Several Stupid Things without being aware of how we got there.  To the point, the world is full of Several Stupid Things.  Enjoy...

Posted by John Schmaing at 9:50 PM