Let's have a talk. 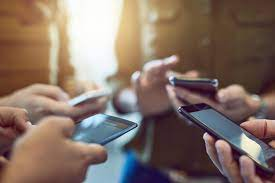 People have engaged in a new form of communication.  This communication is stealing the ability to have a verbal conversation away from young folk below the age of 30ish.  A group of Younguns will sit in the same room silently tap, tap, tapping upon this new fangled devise that was not in existence when I was that age, the Cell Phone.

The Cellular phone is a relatively new invention as far as technology goes.  In our living memories we above a certain age can remember a time before there was any technology at all that could communicate across the void with no attachments to any wires.  When I was a teen, I'm not indulging the amount of time spanning that void, but when I was a teen it was not uncommon to find young ladies wrapped up in the coils of telephone receiver wires after a few minutes of deep verbal communication with another teen, or, heaven forbid, a boy.  At least these forms of communication involved using the subtleties of the voice to get the message across to the listener.  Even today, when engaged in a conversation, with the phone part of the Cell Phone, there is a verbal thing happening to pass information with.  Incredible.

Ok, I'm a school teacher by trade.  I have worked years at honing my ability to verbally communicate with a certain amount of flair and presents.  Because of the generation I abide in I have the ability to have a rational conversation, verbally, with others of my ilk.

Somewhere in the 80's or even as early as the 90's, a gentleman named Jobs began systematically destroying the conversational skills of our youth.  Shame, for Shame on him.

When I was young Apple was either a fruit or a real good record label.  I would have never dreamed what was to come.  I will never be caught off guard in such a nature before.  I am on vigilant watch out for other aliens, like this Job's character, lurking in the fields of our young.  Be afraid, be very afraid.