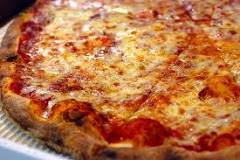 Americans consume more pizza than any other group of people on the planet.  We indulge in it, we re-create it, we try to make it a culinary perfection.  Pizza has been recorded in one form or another as far back as the ancient Egyptians.  Go figure, Egypt claims the origins of just bout everything.

Pizza's modern existence can be credited to the southwest Campania region of Italy.  Somewhere around or in the city of Naples.  Essentially a flat bread with stuff on it, originally without tomato sauce a creation of the Chinese, Pizza has become the great addiction of the American youth since the early 20th century as immigrants to the larger cities coming from the Naples region brought it with them.

It seems just about every large metropolitan area in the United States has a version of Pizza all their own. In Boston you get a slice of pie from corner venders and real nice restaurants in little Italy.  In New York City pizza comes in many flavors.  Chicago has created the Pan Pizza, (My favorite) complete with everything you can fit on it.  I too am addicted to that wonderous flat bread full of delight.

Pizza after all is a whole food group.  It has everything in it and on it that can sustain human existence.  Break it down and you can consider a good pizza a member of the Health food group.  I refer to pizza as Soul Food because in certain circumstances you are feeding your soul.  And a Happy Soul it will be to.

So, when you indulge in Pizza remember it's origins, Egypt or Italy, and express your Americanness and fix er'up to the hilt.