Is all work Honorable? 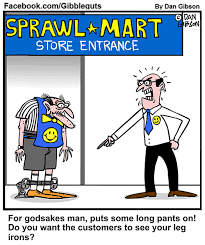 Many years ago my dentist said to me that, "All work is Honorable."  I didn't agree with him, and still don't.  He had no idea at the time what kinds of things can lie in one's past.  Today I work at Walmart two days per week.  Walmart has become the largest entity of it's kind on the planet.  It has more employees world wide than the United States military.  Considering the US has the largest active professional military  on the planet that is saying something.  Walmart has Stores and Supercenters in virtually every nation in the world.  The company has recently pulled it's holdings out of Russia due to the war in Ukraine.  Russia has since stolen the operating model and opened versions of Walmart of their very own using the old locations that were previously occupied by Walmart.

I'm not a real fan of Walmart however.  I have recently been convinced that the Devil's name is actually Walton.  This is a family name not actually the name of one man, we know him as Sam.  Sam Walton is not the Devil, he would roll over in his grave if he knew what had happened to his company, however his grandchildren and greatgrandchildren proudly collectively wear the moniker, Devil.

When arriving at work on the weekends I can swear I hear the screams and moans of tortured souls.  The place called Wal exists on one of the outer rings of Hell.  It is said the Dante channeled demons when writing the "Divine Comedy".  I believe he was actually seeing into the future and witnessed the rise of the world of Wal.  His work of literature is a perfect copy of the operations and power structure of Walmart.  It is the coming and goings of the green river that keeps the business alive.  The associates are the poor souls that are being tortured and the management are the demons that guard each ring of Hell.  At the Centre stands the Devil amid the Camping and outdoors equipment, Hitler in one hand, Caligula in the other, and the Donald at his feet, all taking turns being devoured by their own sins.

I disagreed with my Dentist that day.  Not all work is Honorable.  However, Honorable people often do un-honorable acts in order to create positive change in the people.  Walmart has more employees than the US military.  Fortunately the average intelligence of Walmart management is that of a walnut.  Therefore there is no worry about an armed conflict brewing with the Land of Wal.  You never know what things look like in the universe right on the other side.