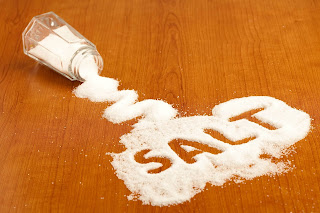 Salt is one of the most important minerals to our physical well being and personal health.  The chemical combination of two very deadly poisons, Na (Sodium) which will violently combust in the presence of oxygen, and Cl (Chlorine) that travels around in a sickly green gas waiting to combine with water to chemically transform into HCl (Hydrochloric Acid).  At the very wrong moment this green gas can be breathed into the lungs and transform in the lungs to this acid.  Not a good thing at all.  However, you combine the two and have a substance that the human body can not live without.

I used to be a fairly proficient outdoorsy type.  When I was younger I would grab a backpack, a sleeping bag, some extra water, and a couple of granola bars, and head out on the nearest trail to find an adventure at the hands and or paws of nature.  If need be with the help of my handy dandy Swiss Army knife, I could dig up edibles  and whittle myself a shelter out of  an old log.  I was good.  At that time in my youth I even had the presence of mind to create what we used to call rescue water.  That would be a quart of water mixed with a couple tablespoons of table salt.  This concoction of slightly salty water was to fight off the effects of the Big Yellow Orb in the sky.  I grew up in the Great American desert where the proper balance of water and salt can keep you alive under the right conditions.  Today the young hikers drink things like Gatorade, and other premade products to do much the same thing, keep you hydrated and properly chemically balanced.

Now that I live in Northern New Hampster, a place that usually has such pleasant weather, I've forgotten the simple things that an outdoorsy fellow such as myself should know, Salt.  We have been experiencing what the weather man calls a legitimate heat wave.  We have had temps of over 90ish degrees for an extended period of time that is extenuated by such lovely super humidness. The fluids of my body are leaking excessively from the pores of my skin.  I found my self extremely dehydrated and feeling like I should have taken the license plate of the truck that ran me over.

It was later in the week that I had one of those epiphanies, an event of overwhelming memory, and moment when I could swear I actually saw a light bulb over my head, rather dim but there non the less.  I mixed up some rescue water, had a few chips and, poof, the majick happened and I felt much better.

The things we learn early in life sometimes come in quite handy later in life.  The next step has to do with Potassium I'm sure of it...

Posted by John Schmaing at 3:28 PM