It's Just Toast and Gravy. 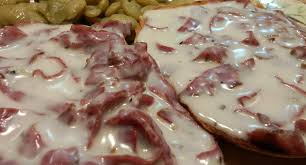 When I was a member of our great governmental machine, a cog in the works so to speak, one of my favorite breakfast delicacies was fondly called, "Sh*t on a Shingle."  Not a very appetizing name I know, but hey once you've crossed the boundaries of revulsion the sky is the limit man.  Here's my favorite recipe for "Sh*t on a Shingle":  A few pieces of whole wheat toast, buttered.  That is important, it lends to the flavor.  Then you mix up, probably should do this first, but hey.  Anyways, you mix up a good chicken or turkey gravy.  Thicken it with some corn starch and milk.  Season with salt and black pepper while adding some pre-fried pork sausage.  Let this simmer to desired consistency and taste then liberally ladle over a couple pieces of the buttered whole wheat toast.  Then, if your brave add just a smidgen of either grated cheddar or parmesan cheese.  Yummy man.

Why this wonderous tasty concoction was called "Sh*t on a Shingle" I'm not sure, but according the the Google devise, is has to do with a love and hate relationship service members have with the dish.  Even the Google machine claims that it is pretty tasty.  From the internet monster that's high praise. I really would like to shake the hand of the Chef that originally created this dish because it is partially responsible for my ability to maintain a certain amount of sanity while I was a pawn of the establishment.  I had something to look forward to in the early AM.

While out on maneuver's we automatons of Uncle Sam generally had to rely on a small package called the K ration.  When I was first in the military the K ration was in a box that contained something called, "Mystery Meat."  a couple packets of instant coffee, some smokes that I gave away as I never had that nasty habit, and two Chiclets.  I assume that was to freshen your breath after the mystery meat.  There usually was an opener for the can of Mystery Meat, other wise you had to rely on your bayonet to open the can. We used small amounts of C4 to cook with.  That's another story.

Then a couple years into my servitude our K rations were renamed, "Meals Ready To Eat."  That's a mouthful to say for your standard young soldier so we kept calling them K Rats.  These new meals were sealed in a vacuum prepared plastic-ish bag.  The MRE's were generally better packaged and tastier than the K Rats.  K Rats were always questionable just what era they came from.  So the change was actually a welcome one.

Regardless of the packaging and the name of our Meal non of these could stand in the face of the old fashioned, "Sh*t on a Shingle."   You don't have to be a member of the military complex to enjoy SOS, just have taste buds.  Try out the recipe above.  You never know what might happen.  You might get the urge to march in cadence and say, "Yes sir, no sir" to your spouse.  But, I doubt it.

Posted by John Schmaing at 2:17 PM