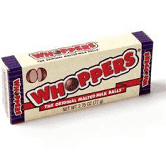 Yes it's true, I have a weakness for Malted Milk Balls, aka: Whoppers.  I share them with Mona and we watch bad Korean TV on Netflix making fun of the acting and film production.  The latest was a series called, "Hellbound".  The basic plot is the protagonist, a burnt out detective who gets tied up into an investigation of a lunatic that seems to be able to predict the deaths of bad guys at the very moment of their demises.  This is when some rather large smoke laden demon types show up out of the void and dispatch said bad guy.  These are real bad bad guys, not just your average bad guys.  These guys are going straight to Hell.  I won't mess up the show anymore for you, check it out.

Anywho, I have a weakness for Malted Milk Balls.  I was wrist deep in box, they come in containers that are the shape of cardboard milk jugs, and pulled out a satisfying handful.  I have a fairly good sized hand so, it was satisfying.  I was munching happily on my Whoppers when I bit down and instead of that happy crunch I was expecting there was a soft chewy goo.

Now I know that working in a candy factory can be tedious and your average factory worker needs a little stress relief and I not against a good practical joke, but someone put a Caramel Ball in my Malted Milk Ball box.  Now, I'm not against a good Caramel Ball, but when your expecting a nice chocolate crunch the sensation of a gooey bite can be disturbing.  The fellow responsible needs to be chocolate dipped and feathered.

Posted by John Schmaing at 4:39 PM