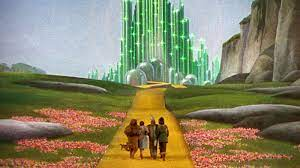 "Follow the Yellow Brick Road," was the song Dorothy and her friends sang as they searched for the enlightenment of the Emerald City and the teachings of the Great and Powerful OZ.  The road wandered and twisted, traveling through the most interesting, and for Dorothy terrifying experiences her imagination could conjure.

Buddha spoke of five paths to enlightenment each as wonderous and adventurous as the above. They are: The path of accumulation, where of get stuff and let stuff go and get more stuff and so on, each step getting you closer to your goal just before it goes away. The path of preparation or application, where you plan things then do them. The path of seeing, that is a place where you see the truth, the folly, and the reality of where you're at. The path of meditation, this is the most common path.  This is the path that people accept as a standard for enlightenment.  This path can lead you straight or delude you.  That is up to you.  These paths are just as treacherous as the "Yellow Brick Road" and the Red Road.  Often people practice these paths for self indulgence.  Stuffed shirts all.  Jerry Garcia suggested that if you see the Buddha on the road, Kill him.

The Hindu path is similar to the Taoist path, that are simply called, "The Way."  Hindu's say, "Jnana Marga", and Taoist's just say, "The Tao".  They both translate loosely to "the Way."  I'm staying away from the pantheons of Gods and Deities because we could go on forever.  Wait, that's what has happened after all, right?

The Jews, the Christians, and Islam all follow a similar path.  These are the children of the book.  Each has a different version of the same story adding on to it as the generations change and grow.  This path started with the Covenant Abraham made with God.  Abraham is the father of each of these belief systems.  To bad they can't agree on the semantics.  Many wars would have been avoided, but I digress.

Paths of all kinds leading to the same place.  We have many choices and many lessons.  Each of us is an individual living in a collective.  Our path intertwines with other paths and eventually was all look in the mirror with the same eyes.  And at some point we all have the same question of the eyes looking back at us, "Just who the hell are you?"

Posted by John Schmaing at 6:02 PM