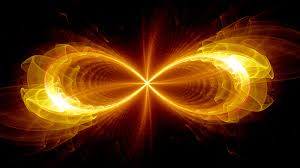 Does infinity exist?  This is a question that has been pondered by Physicists, Meta-physicians, and Mathematicians since 1655 when John Wallis originally asked the question, does infinity exist, and laid the number 8 on it's side  to create the symbol for the Infinite.?  ∞

John Wallis was an English Clergy man and mathematician that partially expanded the idea of Newton's Calculus by introducing both sides of the infinite and infinitesimal as ∞ and 1/∞. That being the ever expansion of the universe outwardly and inwardly at progressively the same time.  This mathematical concept has been tested and tested, with physicists and mathematicians of all stages of the game trying to prove and or disprove the concept.  The math holds up.  This is the foundation and beginnings of String Theory.

So, imagine the circumference of a circle, 2πr, and trace the outside of that circumference.  Starting at one point and tracing around you find you're at a completely different point, and will never be at the beginning point again.  The circle is an ever expanding connection of points traveling in an arc.  Now lay that circle on it's side and it becomes a continuous straight line.  Cut the line in half perfectly, and so on adjusting for perception. You will be cutting for ever.  It is internally expanding infinitesimally forever.  So, at the same time the circle is expanding outwardly, it is expanding inwardly.  𝝿(∞ + 1) = 𝛑(1/∞ - 1)  As the bubble expands outwardly and inwardly the beginning stays congruent and remains at zero.  This is the Zero point, the singularity.  For each one of us that is the center of our universes, the center of us.  We are the singularity.  Ouch, makes my head hurt.

That really doesn't answer the question whether or not infinity exists or not.  As the matter of fact, it brings up a multitude of other questions which may or may not include, "Who am I if not God?"  But, that is the Metaphysician in me talking not the Mathematician.  They sometimes have arguments at my expense.

Does infinity exist?  There are no agreements, there is no proof, the math says yes, and no.  In an ever expanding and imploding universe we may never really know. Posed with this question, I just look to the stars.