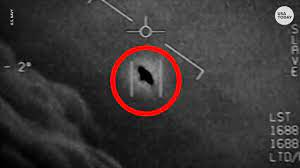 We may look into a star filled night sky and possible notice dimly lit objects moving every which way, to and fro across the speckled tapestry of darkness.  We may set to gazing at these flying objects with wonder and ah.  We might even speculate as to the nature of these sparkling wonders of nocturnal motion.  We may wonder, we may speculate, we might even share stories of objects carrying travelers from long lost civilizations visiting upon us the historians of ages gone by.  May we wonder?

Sometime during, approximately, 2014 to 2017 the United States Navy began having encounters with interesting objects that they could no longer deny or confirm.  The rate at which these Ariel Phenomena interacted with the Naval Pilots, Radar Technicians, and Ship Board personnel began multiplying exponentially.  The gig was up.  The cat was let out of the bag and several of the pilots and personnel involved began disclosing the phenomena.

During the same time period the United States Government went through the task of reclassifying what we commonly call the UFO, (The unidentified flying object).  At first I objected.  After all we grew up with that term and were comfortable with it's ramifications and possible inner and outer meanings.  Until I understood the reasons behind the reclassification.  A UFO can be anything in the air that isn't identified.  It could be a fancy airplane, a meteor, even a bird that flies faster than you can see.  Lots of stuff.  However the new title, UAP. (Unusual Aerial Phenomena) implies that someone somewhere knows what is flying above, but finds it unusual enough to investigate.  That narrows the field quite a bit.  Now, we have things flying that are not regular that may or may not be under intelligent control.  Are the governments of the world about to disclose something, "Almighty" or keep us in the "Dark".

Recently NASA, (The National Aeronautics and Space Administration) was given the charge of investigating all UAP and UFO sightings after 2014.  They were given this authority from Congress with no classifications attached.  Supposedly all findings will be public knowledge.  Is it finally happening on the cusp of a possible minor nuclear skirmish in Eastern Europe?  Strange, very Strange Indeed.

Posted by John Schmaing at 9:01 AM