Courage, an exercise in Nonsense. 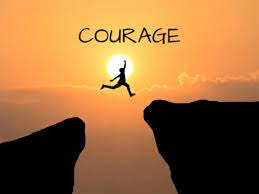 Courage is the attribute that gives a person the ability stand up for what they believe in regardless of the outcome.  It is the thing that lets us stand at the precipice without fearing the view.  Courage is the right stuff.

True courage is taking action in the face of fear.  Controlling fear is the way we get a handle on primal emotions.  The urge to flee is generally the first idea that guides us.  This guide is a liar.  It will lead you astray and trap you in the darkness.  Courage will overcome the darkness and bring the light.  You will see the truth.

Some say that one man's truth is another's fantasy.  Truth is the light that shines from reality, or realities as the cases may be.  Each has a different reality.  Each being subjected to the identity of each viewer.  As many that see are potentially the centers of Universes complete in new rules and new courage.

Grab your light saber and face the evil empire and show no fear.  An example of courage.  A Jedi Knight is Fearsome, not Fearful.  Full of courage  Run away screaming like a little girl.  Lacking courage.  I'm making it sound very black and white, but you've either got it our you don't.

Do I have courage, hell I don't know?  Do you have courage? That's up to you.  However, I stand in the center of all white light, and nothing can harm me.

Posted by John Schmaing at 9:00 PM