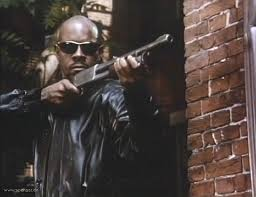 In the late 80's to the early 90's was a program called, "A Man Named Hawk,"  played by Avery Brooks. Hawk was a ex CIA Black Ops type from the last great battles of Viet Nam.  The character was a spin off from the series, "Spenser for Hire." played by, Robert Urich.  I was a fan of both programs, however I liked the character Hawk much better. Hawks character first appeared in the novel, "Promised Land," by Robert B. Parker who wrote stories about good guys verses bad guys, and victorious underdogs.  Hawk was both a good/bad guy and an underdog.

Avery Brooks was a long time Jazz musician that played with the likes of Stanley Clarke, and Chick Correa.  In the 70's the three actually played several venues together to many adoring Jazz fans.  Stanley Clarke played Bass, Chick Correa tickled the keys, and Avery Brooks the Marimba, Vibes, Percussion, and Vocals.  What the reader may not know is that I am a classically trained Jazz Bassist myself and used to play in a Big Band that toured the Northern United States for about 4 years in the late 70's.  I met a few people.

After I left the employee of our Uncle Sam, Avery's portrayal of Hawk, complete with his sense of justice, Arthurian ideals, and chivalry helped me find myself amongst my imagination  and reality.  I would watch his program late at night after walking home from my office on main street in Berlin.  It was a highlight of my TV enjoyment.  Hawk, and Star Trek, both sit high on my moral standards compass.

The neat thing about that time was I had a student that was very well off and was family friends with Robert Urich and got to meet the characters from each of the shows.  Made me feel closer to the character Hawk.  And my Jazz experience brought the package together.  It was good.

Yesterday through the magic of the internet, I rediscovered the series, "A Man Called Hawk," on one of the free internet viewing platforms and started watching from the beginning again. Many happy memories are hidden in the toughness and intelligence of the Man Called Hawk.  I do suggest that if anyone has a nostalgic ebb for the eighties and nineties, What Hawk on Tubi.  The program will tickle your yearn for Chivalry.  Enjoy...

Posted by John Schmaing at 8:39 PM