George of the Jungle. 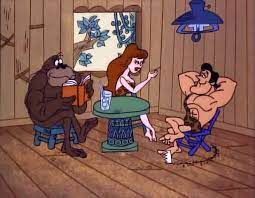 I know the idea of a George character living with an intelligent domestic Gorilla is absurd, however on March 25, 2019, Mongay Bay News publish a scientific paper by Mike Gaworecki about a recent discovery of intelligent Great Apes in the upper basin of Northern Congo.  These Chimps, (Pan troglodytes schweinfurthii) are a nomadic band and walk more upright than any Great Ape other than Humans.

These Chimps are also complex tool users and creators.  They have been witnessed using at least 4 different sets of tools that include:  a long ant probe, a short probe, thin wand, and a flat digging stick.  Each one of these tools has a different use involving a multitude of food gathering feats.  The length of some of these poles gives the Chimps the ability to harvest ants and arboreal bees from a range at which to keep the stings and painful bites at bay.  This is an obvious evolved technique that has been passed from one family member to the next.  This passing along of tools use and manipulation also looks from our perception, like a classroom of young apes being taught by an elder or elders.  Who had classrooms first, us or them?

The young have been witnessed playing much like human children do.  They throw round rocks to each other playing catch.  They'll wrestle like young boys do, play tag and hide and seek, all behaviors that are very complex rational mind stages.

The biggest difference in these apes with what are called, "regular chimps." is their aggression level.  They have the aggression and behavior of an intelligent being placing claim on land.  Sort of like Human kind.  They roam in the neighborhood of 50,000 kilometers in the Congo and wage war on other bands of Apes that come into their range.   Did this species of Chimp evolve before or after modern man?  So...

Posted by John Schmaing at 8:53 AM