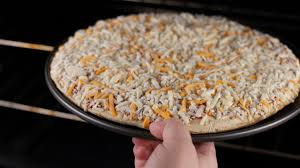 Pizza is America's number one not so quick food.  It doesn't come fast, it takes it's sweet time.  Dominos used to say if you didn't receive your take out within 20 minutes it was on them.  That didn't last very long as college students quickly figured out that ordering pizza and giving wrong delivery instructions was a way to get free pizza.  The company rebuked it's offer.

I prefer to drive to get my pizza.  That keeps the delivery dude from taste testing then adding twenty bucks to the bill.  I'll give a tip, but I'm not paying for a tank of gas.  Shit the stuff costs enough to have to take a mortgage out on the pizza box.

I have a three story cardboard condo for sale just in case you think I'm serious about taking a mortgage out.  Actually a fellow not to far from here did actually build a house out of cardboard boxes and laminated plastic.  That was thirty years ago and the house is still standing and in use.  I guess it's very well insulated and weather resistant.  Good idea.

The Domino's drivers use their own vehicles and attached a magnetic Domino sign atop their cars to prove they have pizza aboard.  It's like there's an unwritten law saying that Domino drivers are safe from all driving problems, they have enough just because they work for Dominos.  Poor Bastards.

This evening Mona and I decided to risk eating a Wal Mart Pizza.  It was actually pretty tasty.  I almost hate to admit that.  Wal Mart and I aren't really on speaking terms.  I only tolerate it, and it let's me pretend I'm working for two days a week.  I'm an employee of the largest store chain in the world on the week ends.  I feel so ashamed.

Frozen Pizza has a texture all of it's own.  It is sort of like frozen cardboard with various toppings and extra frost on top.  The frost is what gives Frozen Pizza it's special taste.  yummy.  Wal Mart Pizza's are freshish and come without the frost part giving them an almost palatable repartee.  This is a hard thing to admit.  Maybe I've been hanging around the place to long and it's getting under my skin rather than my nails.

One of the most torturous things in the universe are long finger nails being scratched across a chalkboard.  Wal Mart Pizza is kinda like that.  Nails being dragged across a chalk board.  And, you feel conflicted because it actually tastes ok.  I wonder if the rumors are true, that there is something in the dough effecting your mind?  They wouldn't do that, would they?

Years ago you would step off an elevator with the urge to buy and eat a hot dog, or a drink, or both.  You'd get the urge to spend a certain amount on new under ware in the main Mall store.  Rarely would anyone escape without spending a quantity of cash.  Pizza was high on that list.  The urge to visit the House of Pizza was extremely high.  Could it be the elevator music?  Does that mean we have to spin the Elevator backwards real fast?

Now, back to the Frozen Pie.  Frost involved, toppings complete with cheep cheese and sauce.  It is still a forbidden temptation, a delight we pretend not to enjoy.  My evening meal was tasty after all.

Posted by John Schmaing at 9:01 PM