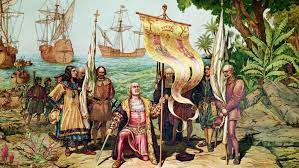 In 1492 Columbus sailed the Ocean Blue.  That Puta, pedophile son of a bitch. Cristopher Columbus is responsible for so many atrocities that listing them is a waste in mental energy.  On top of that list would be the complete antihalation of the Taino people in the Caribbean and Puerto Rico.

The Taíno are the Arawakan-speaking peoples of the Caribbean who had arrived from South America over the course of 4,000 years. The Spanish had hoped to find gold and exotic spices when they landed in the Caribbean, but there was little gold and the spices were unfamiliar. Columbus then turned his attention to the next best commodity: the trafficking of slaves.

Our history books give Columbus credit for discovering the Americas for Spain.  This is complete BS.  Columbus was not the first or the last Spaniard or Italian for that matter to wander across the Big Water to this side of the pond.  Columbus was not an explorer in the classical sense.  He and his crew were mercenaries that would work for any government willing to pay for their trade, give them a ship and send them on their ways.  Columbus was a conqueror, a monster that was working for the Holy Inquisition looking for Gold, Slaves, and Children, which he and his men exploited in ways that defy description even in today's age.

Columbus waged the first biological warfare campaign on the southern continent.  He purposely gave the indigenous inhabitants of the islands blankets and food that had been infected by recently deceased victims of Small Pox and Anthrax.  Which began the deaths of over 300,000 Taino people.

The Mercenaries under Columbus' command took children and infected them with syphilis and other sexually transmitted diseases.  This infection spread west, south, and north from the Caribbean into the North American and South American continent beginning the infection of many other tribes of peoples as well.  The Angel of Death had arrived in the Americas. Europeans originally contracted syphilis from farm animals, primarily sheep.  That's all I'm going to say about that subject.

Today is better celebrated as Indigenous Peoples day which includes all Native peoples of the Americas, North, South, and Central.  It's time to put to rest the deliberate erasure of cultures that have thousands of years scientific knowledge, spiritual connection, and the love of the Earth.  It's time to remember and heal.  Not forget, change the history and tell the truth.  Mitakuye Oyatsin Hetchetu yelo. HO (For all my relations it is so.)

Posted by John Schmaing at 6:25 PM