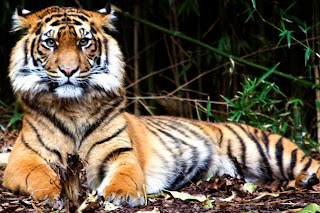 The tiger represents strength and tenacity. The Shaolin of Hunan studied the animals of the forest and created fantastic forms of movement called Lohan. Bodidharma in a cave north of the Shaolin monastery created the original 18 Lohans, but that is another story.

Strength and tenacity are two complimentary disciplines. Strength is a physical presence, the physical prowess of the animal, the tiger stalking it’s prey then attacking feeding on the flesh, nourishing itself of the prey’s own strength. The fighter uses physicality to overwhelm that of the opponent. Strength is also the act of a focused mind, the ability to look through a scenario or problem and see the solution at the end of that problem without giving up on the solution.

Tenacity is the act of persistence. A tiger does not give up. When it hunts and has it’s prey in focus the tiger goes for the objective until it has finished the task. A fighter that emulates the tiger has the opponent in his focus and keeps fighting until the opponent can no longer fight. This tenacious nature is also an emotional/mental state of mind. A person with a tenacious nature never gives up. He/she might have a goal or objective that has a certain outcome with steps that need to be taken to get there. A tenacious person does not give up on that goal, he/she works on the steps to get there without giving up, even when the path is rocky. A tenacious warrior is one that trains diligently and never looses track of the goal or the path before them, this is the warrior’s path.

The tiger stands for strength and tenacity, he never gives up on the goal at hand and never forgets what he is, a tiger.