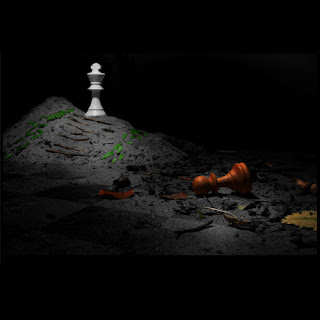 There is a belief afoot that the things we do in this life are pre-determined, that we have no choice on how things are going to work out and that we are part of a larger plan. Who determines our outcomes is the mystery. It may be a great giant playing chess on a cosmic board using us puny humans as the pieces on that board. Of course being cosmic chess there are many more pieces in play than just the standard 32.

Most of us would be the pawns; we would be the worker bees doing the lords bidding. The big giant playing the game would be our kind benefactor putting us in play at places on the board for our own higher purpose, our best interests. Sure that’s what we really believe. Knowing the world of competition like I do, I can see two large grinning giants sitting across from each other at the cosmic chess board occasionally fiddling with the pawns, occasionally staring into each other’s eyes anticipating the others moves hoping to intimidate with thoughts of this or that. We the poor pieces of the game are caught in the middle of the mental war of titans.

Chess was once called Shawmut, the death of the king, and was invented supposedly by an enlightened Persian King as a way to both train his generals and torture the captive foe in his prisons. He figured that his generals could think through the strategies and that the fallen could not fathom the complexities of the game.

Now we’re back to the destiny question, are we the generals or are we the fallen? Have we gone mad playing the game and forgotten that we aren’t actually the pieces at play, but rather the giants playing the game, or are we just playthings for the gods? I’ll give you an alternate idea; we are both the giant and the pawns. We are the generals and the fallen. We are the gods and demigods of the game. We just have this problem; in this reality our minds are incapable of remembering that we’re playing the game and being played at the same time. Go figure.