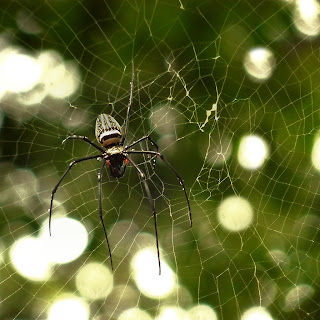 Iktomi was the first man. He was full of pride that Tunkasila picked him to be the first. Iktomi wandered the world exploring every corner to make it his own. Now Tunkasila set to work populating the world. He created Tatanka first to care for Iktomi. It was Tatanka’s task to take care of Iktomi and the Pteoyate, the first people.


Now Iktomi was so full of pride that he was becoming arrogant. He felt Oyate should listen to all he said, and do all he said to do. Iktomi was so full of himself that he was growing ignorant of the needs of Oyate and all that Tunkasila was putting on Ina Mahka. Tunkasila was very wise and saw the things Iktomi was doing and spoke with Tatanka. Tatanka had a wonderful idea, he said to Tunkasila, “Lets make Iktomi carry the burden of Oyate for a period of time to teach him a lesson.”

Tunkasila thought about what Tatanka said and created a plan. Together they decided to trap Iktomi in a snare to teach him a lesson. What they didn’t know was that Iktomi was listening behind Inyan and knew what they were going to do. But, Tunkasila is very wise and knows what others don’t know. He knew the thoughts of Iktomi and was prepared.

As Tatanka ran past Iktomi the ground shook and Iktomi tried to spring his trap, but the trap backfired and got caught in the snare that Tunkasila had put before him. The snare and the trap became entwined wrapping Iktomi up in a ball. Tatanka ran past again catching Iktomi trapped in the ball and began dragging him behind.

Iktomi began crying for help from Tunkasila, but Tunkasila ignored Iktomi’s cries. Ina Mahka had pity for Iktomi and pleaded that Tunkasila be lenient. Tatanka asked Tunkasila to have pity on the first man and give him a task to pay for his sins. Tunkasila thought long about this and came up with an idea. He created Iktomi in a new form with the responsibility of carrying the travois with him always to care for the Oyate and Tatanka. Tunkasila gave Iktomi eight legs and eight hands to carry the burden and eight eyes to see clearly what he must do. From that day forward Iktomi became the creator of the travois and the maker of traps. The Oyate began learning the lessons Iktomi has to share through his right actions. Mitakuye Oyatsin Hetchetu Yelo, Ho.

Enjoy the story. Read it twice, first through then again after reading the definitions of the words. Have fun.

Peace and Balance,
John
Posted by John Schmaing at 8:15 PM