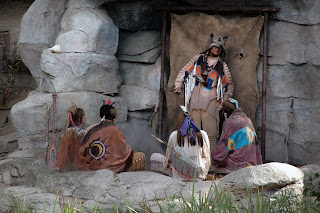 Many years ago telling a good story was the way news and information passed from one person to the next, from one community to the next, even neighboring countries. Spinning a good yarn became an art form that today is passing away into obscurity because the children of the world are not interested in remembering where they came from or who they are. The sad truth about society is that the more educated it’s people the less likely those people are to sit and listen to the stories of the past.


The tribal elders of the past knew that the youth would eventually loose interest in the art of the story and began coming up with ways of catching the interest of the listener. Hence was born the art of the lie. This is not a lie to cover up or hide the truth, but a lie that wraps the truth in metaphor, the birth of the parable.

I was raised by a family of storytellers. Being half Irish, half American Indian I am all story and metaphor, a bundle of ancestral history passed orally through the ages. Here is a small lie that I will share for you to enjoy and hopefully help you create your own stories through example.

Anpetu the great chief of the sun had a son that he named Anpao. As Anpao grew into adulthood his father would tell him stories of the dangers in the land of the sun. He would warn him that the Gnasty’s living there would keep his soul. Anpao was in love, he loved a maiden of the sky, a daughter of Skan Skan the chief of the blue teepee. Anpao approached Skan Skan about marrying his daughter, but Skan Skan wanted many horses for his daughters betrothal. Anpao went to collect horses for his dowry.

Skan Skan was happy that Anpao asked for his daughter’s hand in marriage and Anpetu shone greatly to the blue teepee with pride, but the Gnasty’s of the sun were jealous and sent the monster Uhnk to kidnap the young bride. Uhnk took the girl to the heart of the sun where he thought no warrior could find her, but he did not know the heart of Anpao.

Anpao traveled to the sun to free his love from the Gnasty’s there and win her hand with his bravery. This battle is still fought today and that is why once every twenty-four hours the skies grow dark and the world lays quiet, because Anpao is doing battle with the monsters of the sun.

This is a parable as taught me by my grandmother when I was a tad pole. I have changed it and molded it and like any good Irish/Indian lie it entertains the listener. Good luck with your stories.