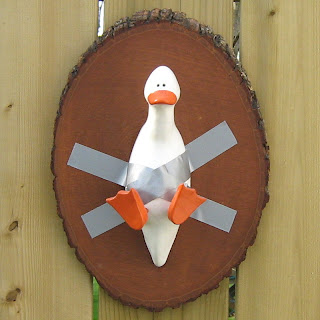 Duct tape is an interesting substance. It holds pipe together in a variety of ways, and for a variety of reasons. Duct tape has been referred to as the universal fixit, the handy mans ultimate helper, and a gift from the techno gods. The right man with a roll of duct tape in his hands can create miracles. I’m remembering a program on PBS called, “The Red Green Show,” about a master duct tape user and his idiot nephew. Some of us here in the North Country consider that program an instructional video series.


These days however, I have been thinking of an alternate use of the magical tape, behavior modification. Now I know what your thinking, “how cruel, how terrible, how could anyone do such a thing?” But, I must say that in some certain situation that I have been involved, and yes I am a behavior specialist, duct tape sounded like the most reasonable option. As a matter of fact a friend of mine many years ago was having daily trouble with his teenage son. After about eighteen months of continual verbal harassment that was becoming physical, not going to school, and eventually the child’s not coming home at night my friend after consulting with the police dept. in his home town, duct taped his son to the foot of his own bed and left him there for a period of no less than twelve hours. Cruel you say, inhumane you think, the father going over the deep end you conjecture, no I say. The fact is that this unruly child, this violent young man, this potential social statistic, never again said a cruel remark, made a physical gesture, or stayed out later than his curfew. He in fact began treating his father with the utmost respect and humility and today is a very successful social worker. Dad was now the hero.

So I have been thinking of duct tape. I take one out, roll it around and think of the possibilities. Then I put it away again to resort to my normal behavioral techniques, but that possibility is always on my mind, just think of it.