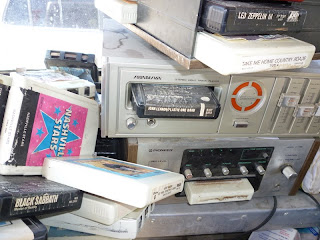 Mankind has gone through many growth spurts in a very short period of time relatively speaking. In less than the past one hundred years he has taken to the air, broken the sound barrier, and gone to the moon. Man has gone from the abacus, through the calculator, to the modern computer. He has gone from walking 20 miles in a day or two to driving it in less than thirty minutes. Man has developed technologies that have stretched the fireworks of the past to the nuclear bombs that threaten us all. As Oppenheimer once said, “I have become Sheva the destroyer of worlds.”


I remember when I was young there was no such thing as the cassette tape. A friend of mine brought me to his house because he wanted to show me the coolest invention to come down the pike since buttered bread, the cassette. It didn’t get scratched like records did, the sound quality at that time was next to incredible, and it wasn’t as big a pain in the butt as a reel to reel was to change the tape. Cassette tapes were eventually replaced by cd’s in the eighties. Isn’t that special?

I can’t forget the dubious flirtation we had with the eight-track tape. I had a built in eight track in a 1968 Chevy Impala Super Sort I drove as a kid, and I had a deck in my room, but the dang things would bind, the machine would eat the tape, and you couldn’t conveniently search for your favorite tune you had to listen to the whole tape, all four god forsaken tracks of it to get to your tune of choice and by the time you get to it your not in the mood to listen to it anyways. So, I avoid mentioning eight-track tapes as much as possible.

I remember when I was smallish, my dad used to bring my little sister and me to his place of work, the high school, he was an English teacher and would let us watch movies in his office like, “Jason And The Argonauts.” This was one of the coolest movies of all time, according to my kidness. It was on one of those old projectors with the reels that you had to change at certain points in the movie, unless you’re into watching white screen and listening to the flapping of the reel. Then one day appeared this magic box with a large door atop it for this big cassette-looking thing. This was the predecessor to the VHS tape machine, and was allot bigger than a VCR. I remember purchasing a VCR later in the eighties, the damn thing was expensive, but I just had to have one. Today I’ve gone from playing DVD’s to playing Blue ray discs on my real cool Panasonic 5.1 surround sound home entertainment system, even cooler.

TV sets have changed mega amounts. The old TV I had when I was young was a black and white Sears and Roebuck model that had one station that played two things, the news and the news. I guess that’s all we rated back then. Today we have this ultra thin device, about an inch thick or less that is 52 inches diagonal and plays a High Definition picture that looks just a tad better than reality. I can understand why we escape into fantasy so easily. Mankind is evolving.

Cooking has changed. My mom would cook everything on the stovetop or in the oven. It took some preparation and forethought and was a reason for the family to sit and have a discussion at least two or three time a week at the dinner table. Then this other thing hit the market, you could throw a cup of water into it and in less than a minute you had a good hot cup of tea. I have one in my kitchen and I’m ashamed to admit I use it more than the stove I have. However, I still cook it old school and enjoy a good meal with Mona at least three times a week. Our kids are all gone out of the house now, but we still treat each other to one of the finest delights known to man, a home cooked meal.

Our cars have become smaller and more fuel efficient, the planes bigger and carry more people, the trains smoother and much faster, and I’ve even heard that there are plans for the regular folks to ride a space shuttle just for giggles. So, Our Modern World is one of ever changing things, an elastic model of man’s history and his evolution into the future, and possibly of man’s own devotion to man and his need to learn.