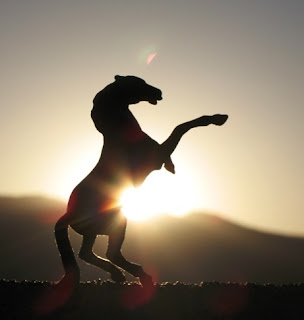 When I was young I had a horse named Pacos. He was a black quarter horse with white across his chest and face. Pacos was a good horse. He was a good cow pony able to cut a steer quicker than prairie dog can slide down it’s hole, and powerful enough to pull things out of the mud if called upon to do it, once or twice.

Pacos had a small flaw though, he was neurotic, He was afraid of his own shadow. If the mood struck him just right Pacos would loose it at the sight of his own shadow. He would rear back on his hind legs spin about and high tail it back to the barn. It took along time to train that fear out of him. When he wasn’t running away from his shadow anymore he became jittery at sudden unusual sounds. Out on the plains the wind can sound all sorts of ways. He would whinny, toss his head and run back to the barn. It took longer to train that out of him than the first time.

Pacos saved my life one day. We were out ranging the fence. That is we were checking the fence on the property and fixing the places that needed fixing. That usually took a couple days. Anyways, there we were riding the fence when I found a spot that needed a few nails and some tightening. When I jumped down off Pacos and started toward the fence I heard the unmistakable buzz of the rattle on our friend Mr. Rattle Snake. I didn’t see him only heard him, but Pacos reared, rising up on his hind legs and came down hard three or four times right next to me with his front hooves. When he stopped I noticed the buzzing had stopped, Pacos had stomped the snake to death with his front feet, he had saved me from being bit.

For all of his neuroses, Pacos was there when I needed him. He was a smart horse, a wise horse; yes Pacos was a good horse.