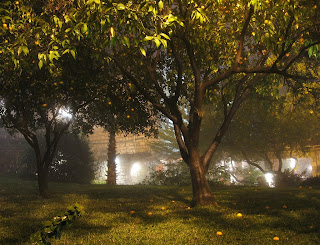 A long time ago there was a man that lived alone on the edge of an enchanted forest. His home was small and sparse, but he had every thing he needed.

The man would wake every morning as the sun began to rise and pray at an old tree outside of his house. Then he would walk to the stream just inside the enchanted woods and bath in it’s cool clear water. The man lived a very simple existence and was happy next to the enchanted woods.

The man hadn’t seen other people in a long time. He was not sure how long it had been, but he knew it was a long time because he had to repair his house at least four times, that he remembered. He became curious and decided to take a walk. He walked down the path that leads to the road that would lead to the village he remembered down the hill.

On the way he came upon a child playing in the grass next to a flower garden. Watching the child play the man smiled remembering what it was like to be so young. He walked on remembering the games of his youth.

The man came to the edge of the village, it wasn’t the way he remembered it. The village was noisy and smelled bad. He could hear dogs barking around some corner and came upon another child. This child was not playing as the other child was. This child was sitting quietly looking to the distance with a tear in the eye. The man watched this child for a time and felt a growing sadness within the pit of his soul. He looked around him and saw no one else, only an old building that hadn’t been kept up for a long time and the soul less child. He walked on.

Finely he came to the center of the village that had grown to a city since last he visited. He stood next to a large fountain thinking about the two children he had seen while walking here. While he stood there looking into the water thinking, another man walked up to him and asked, “Sir, may I help you?”

This man was young and dressed in a uniform that announced his presence as an authority figure. The older man looked at the younger man in the uniform and said, “No, it is I who can help you. You and your people have forgotten where you came from and who you are. You have lived many years here expanding your village into a great city without understanding what it is to expand your inner being. You have grouped yourselves into one place and have killed the souls of your young. The ones that live outside your walls are well, but unaware of you as you are of them. No, you can’t help me, but thank you.”

Then he walked back the way he came. He came to the lost child, lifting the child up in his arms. The two of them then came to the playing child, who met them with joy in the eyes. This child too came with the man. He took them to the enchanted forest next to the holy tree in hopes that he might save the people of the city.

It had been over 200 years since he last walked the way of the village and his curiosity had brought the village back to him.

Peace and Balance,
John
Posted by John Schmaing at 6:39 PM