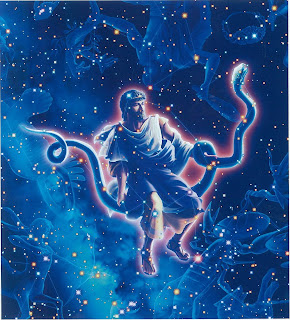 It seems we have a new, or rather old, visitor in our skies. Those of us that were getting used to the, “sign”, we were born under now apparently have to re-align ourselves to the new zodiac. Standing high in our night skies again is the son of Apollo, Ophiuchus. To be completely honest with you I didn’t know there was such a character in the stars. So I did a small amount of research and discovered who he may be.


Ophiuchus’ mother was impregnated by the god Apollo, but was burned to death after having an affair with a mortal. Apparently it isn’t good to piss off Apollo the Sun God. When she was burning Ophiuchus was torn from her womb and was given to the Centaur, Chiron the Wise as a son who raised him as his own.

Ophiuchus grew to be a very wise man himself and is said to have tamed the great serpent, Laocoon. The serpent is still considered the sign of wisdom and healing. Ophiuchus apparently had the power to heal the sick, send away demons, and raise the dead. Because of his similarity to Jesus, Christianity removed him from their minds eye. This is a practice all to familiar with these fellas, but that’s another story.

The gods were jealous of Ophiuchus’ abilities and removed him from the memory of man. He was set in an obscure place in the heavens and left there to live alone. Sound familiar? Was he monsteratized, a devil, or Satan himself? Zeus finely killed him with a single bolt of lightning.

His father, Apollo raised him from the dead and Ophiuchus became the god of healing and wisdom, the phoenix re-born.

I find it interesting that such a character would not so quietly rise out of the ashes of ancient literature and into the astrological hearts of modern times. I realize that a thirteenth symbol has been around for a very long time on different charts, but at this time of change, at this time of upheaval, at this time when we find our planet shifting polarity and the warble changing slightly, we have a new herald in the skies.

So, are you going to adopt a new astrological sign or are you going to remain steadfast to the one you have? Romona likes the idea, but as for me, I like the one I’ve had, it’s easier to remember.

Peace and Balance,
John
Posted by John Schmaing at 6:39 PM