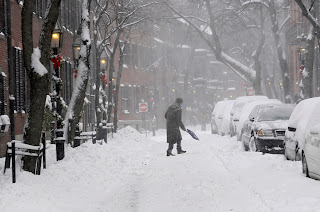 
Here in Berlin we too have many words for snow. There are words that describe the play children do, “Look at that tobogganing snow.”

There are words for what adults do, “Look at that skiing snow.”

They’ve even dedicated a work load to snow, “Isn’t it wonderful all this tree cutting snow?” Some of the words we use here in Berlin for snow I can’t share here. The reader may have sensitive eye’s and ears, but I’m sure you understand.

Yesterday when I left for work there was no extra snow on the ground. We only had our usual dirty snow that had been sitting for a couple of weeks, however sometime during the mid morning fluffy stuff began falling from the sky. At first it was sort of pretty to look at, then the rational mind kicked in and said, “Oh, that’s not good.”

It snowed better than a couple inches an hour most of the day. When it was time to return home at the end of the day I had discovered my Jeep was up to it’s side walls in snow. I brushed her off and four wheeled out into the street and off to home.

I reached my destination with only a slight delay when I found a four foot snow bank at the end of my driveway. What a wonderful sight. I four wheeled through and parked my Jeep.

My beautiful wife, Romona, was waiting for me when I walked into the house and little dusty with the cold stuff. I said, “Hi.”, gave her a kiss and announced that a battle was about to ensue with the snow gods.

She said, “Ok dear,” and I put on my cold weather armor.

I began the manual snow blowing, that’s using a shovel when your blower is busted, and only came in occasionally to announce my progress and ask for a cheering section. I got a cup of coffee and a, “Hurray”.

The sun went down and I was still shoveling. When I was not quite half way through the battle with the white beast a large snow plow appeared on the horizon. The driver seemed quite amused as he looked straight at me and commenced to plow my driveway in again. Now, I must say that I was tempted to speak all sorts of ill words and curse the machine he was driving, but no I held my tongue at bay and just shook my head.

I shoveled from three until nine yesterday evening. It was a good workout, but I believe I should fix the snow blower. As for the fella driving that big orange plow thing, I’m sure his Karma will get him.

Posted by John Schmaing at 4:08 PM