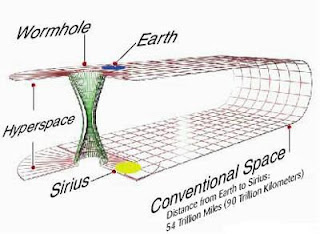 Professor Einstein theorized that time could be breached if the conditions were mathematically ripe and the circumstances were just so. He speculated that the amount of energy, E, that it took to split the mass of an atom, M, at the speed of light squared, C², could possibly breach space time. E = MC², energy = mass times the speed of light squared, has since become a formula that has been written almost into physical science mythology. This formula has been the basis for many science fiction novels, much speculation, and the imaginary ramblings of many an author, including this one.


Professor Einstein and his colleges Nathan Rosen, and Boris Podolsky, were working on what they coined as the, Einstein, Rosen, Podolsky paradox, (EPR) in which if you traveled back in time and met your own ancestor you could accidentally become your own great grandparent. This is a paradox and creates a loop in which time cannot escape. You would be trapped to repeat the events forever.

It wasn’t until Schwarzschild, another physicist, coined the term Einstein-Rosenbridge to describe the existence of worm holes that stem from the ends of black holes in space. Professor Schwarzschild is the actually originator of the idea that we might be able to fold space time in on itself to create a path between the two; making traveling great distances in space and time possible.

So, is it possible to travel beyond space time? Stephen Hawkins said, “Maybe.”

Carl Sagan speculated that man was not alone and our, big brother’s, would have that technology and have possibly already visited us, “Billions and Billions of stars…”

Even L. Rod Hubbard was waiting for aliens to return. The possibilities are endless. My grandfathers had mythology about a race of time and space travelers that actually had a hand in man kinds development. Could these be our angels?

I leave you with the question rather than an answer, "Is time travel possible beyond space?" Maybe…

Posted by John Schmaing at 7:24 PM