Delusions of the Village Idiot

Hi all, the next three blogs are a series of poems that I’ve written about the current neo-political climate that we’ve all been witnessing. The first, “Delusions Of The Village Idiot” is actually a reflection of our past administration, but I am finding many similarities in the current one. They will post one at a time during the next three days. Enjoy and let me know what you think. 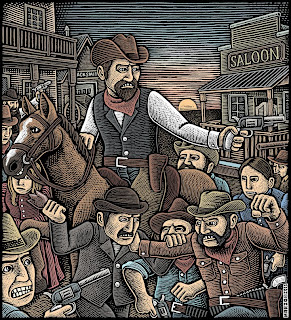 There stood a counted court of angels
Twelve by number, thirteen score
Waiting for the village idiot
To open up yonder door.
A war is brewing outside the step
Larger than a barroom brawl, but
Smaller as it crept upon them
In a flash in the bottle he bore.
Counted was this court of angels
Twelve by number now sixteen score.
Open up one more, idiot
Then darkness closes the barroom door.
Peace and Balance,
John
Posted by John Schmaing at 9:34 PM