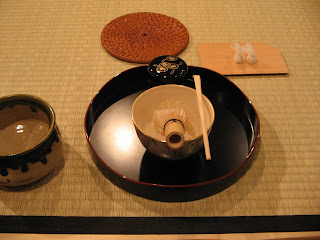 I’ve been in parts of the world where bowing three times over a cup of tea meant you’ve just married your hosts eldest daughter. Here in the good ole US of A it’s the father that hunts the young man down with a shotgun so that marriage may commence.


Many moons ago I had the opportunity to spend some time on the islands of Okinawa. I was young and strong, but not so smart, so I spent time working out with an old fellow named Kuda. O’sensei Kuda was the grandmaster of an obscure form of Shorinryu Karate which has it’s origins in Shaolin Kung Fu. It seems a monk got drunk and crawled into a fishing boat of the coast of eastern China to sleep it off and passed out. The tide came in and the little boat eventually ended up landing in Okinawa. The rest is history, but that’s another story.

While there I learned a ceremony for the serving of green tea. Every process of the ceremony has it’s meaning and purpose, every movement a fluid grace. It usually takes a lifetime to learn it well. I don’t do it well.

I was stationed there with a friend we were both in the US Air Force, it was an experience. My friend fell in love with the master’s daughter and while practicing was tricked, or pretended to be tricked into bowing three times over tea. While he was there he came to the end of his hitch in the service, he decided to stay there on the islands with his newfound wife. I came back to the states.

I haven’t actually practiced the tea ceremony for quite some time. However, each morning I wake and watch the person sleeping next to for a bit thinking of bowing three times over tea. I have a reason to practice the ceremony again and Mona and I will both bow, A lifetime of dedication.