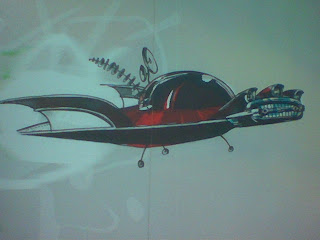 A couple days ago, Romona and I were watching a TV show that we enjoy each week. On that show there was a company that had a space craft that resembled an airplane. It would take off from an airstrip, fly to around 70 or 80 thousand feet then fire onboard rockets that would propel it further out into orbit. Presumably this craft would take high paying tourists to orbit for a few million at a shot. This was a TV program and we presumed it was fantasy and speculation as most TV shows are. Little did we know.


I was watching the news over at the inlaws with my father inlaw, when upon the screen straight from CNN was this craft that tourists could pay a few million dollars to ride into orbit on and fly back landing on an airstrip better than any ole silly shuttle.

My fantasy now turned to reality I’m stretched to find out what’s next an invisible airplane? Oh yea, they already have those. George Jetson where are you?

Peace and Balance,
John
Posted by John Schmaing at 7:14 PM