Don't Rain On My Parade 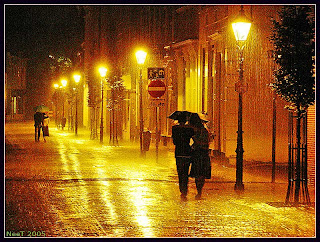 Don’t rain on my parade. It’s already wet and I’m afraid that anything I might have found in the universal box of stuff might be perpetually soggy. If raining means there’ll be new growth and little critters bouncing about then please rain sparsely in short spurts.

I remember chanting that rain should go away, that little Johnny wants to go out and play, the old man had bumped his head and couldn’t get up in the morning, all because of rain, I remember. Do you see that spider over there, the one that went up the clock, that is until it struck one and the rain washed the spider out. Don’t rain on his parade either.
A long time ago there was this story about an old fellow with many son’s and daughters who all had husbands and wives of their very own, anyways this clan built this real big boat and dragged two of every critter they could find into it just to avoid a long wet spell. Well as it goes they forgot one critter and his spouse and that poor unicorn had his day rained on, real bad.

Out on the plains there is a happy little dog that lives on the prairie. He digs little holes and has many happy pups in his den each spring, but there is that occasional flood naturally made or by man, it rains on his parade the poor little fellow.

Here in the valley it’s been raining for quite a bunch and the neighboring lands are all wet, a few drowning cats holding on to floating branches. It’s been raining on all our parades. It’s almost Easter and we’re supposed to have a happy sunny day. Maybe, just maybe we’re all suffering rain as penance for some forgotten sin. Please don’t rain on my parade.

Peace and Balance,
John
Posted by John Schmaing at 6:18 PM