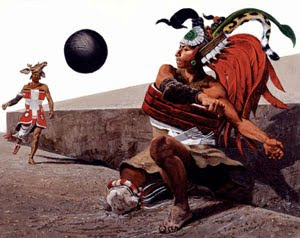 Every culture at one point or another in their histories has had a game or ritual that has expressed it’s warlike prowess.  The Inca had a sacred ball game that included a team made up of members of the opposing army that had been captured during battle.  If the opposition survived the game then they were set free to war again.  In this game the sacred ball was bound in a leather bag and the opposing teams would try to get the ball in a hoped goal.  Sounds familiar doesn’t it.  The sacred ball was of course the severed head of one of the fallen foe.  Ah, things have changed since the good ole days.

Other sacred games were present at that time, the Lakotas had a game played on a mile long field spotted with prickly pear cactus that was played in the bear feet.  The idea was to get a leather bound ball across the oppositions goal line using a special webbed war club.  The mountain man Yellowstone Kelly was made to play this game when he was captured by the Blackfoot after traveling in the wrong neck of the woods.  Kelly was a decent runner and got away to live another day.  Oh yea, if you got caught during the play of this game you were dispatched to the happy hunting grounds.

I myself played a sacred game in my youth.  It was played on a field 300 feet long and 150 feet wide.  This game was complete with medieval armor and had it’s secret symbols to pass from one player to the next that supposedly they would only know.  The game uses a ball that is odd shaped and throws real well.  The object was that one of the armies of players get the ball across a goal line the most times out of a group of periods of time.  The game played mostly with the hands, head, and shoulders strangely enough is called football.  How odd is that?

My little brother played another form of a sacred game called football actually played with the feet, here in the western world it’s called soccer.  Not that you get to actually get to soc the ball, your not supposed to touch it with your hands, odd.

Abner Doubleday invented a game that became the American past time, a game played with a small bound ball and a big stick.  The players throw the ball really hard at each other while one of them holds the stick like an avenging Samurai trying to cut the ball in two.  They run real fast around an odd shaped square trying to get back home while the opposing team tries putting them out, cold.  This is called Baseball and is our favorite pass time, unless you’re an avid footballer.

Sacred games have been played all over the globe at different times in history.  Each has it’s meaning and reason, each it’s process.  When a team wins the game traditionally there is a celebration.  This is the sacredness of the game; it promotes communion, brother/sisterhood, and fair play.  I wonder what Superman would play.