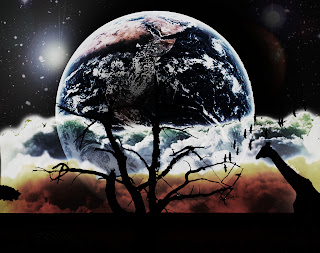 Today I heard some statistics that surprised me. These stats came from about three years ago. The main point of the statement was, “We have four years to do something or the planet will go beyond the point of being able to heal itself.” That was said in 2008.


The rain forest in Brazil is being destroyed at the rate of a football field per second. The oceans are being desalinated at the poles due to melting ice. Jet streams are dipping low to the ground due to “Heavy” atmosphere. That is an accumulation of pollution that effects the tract of the wind. This causes more severe hurricane and tornado activity.

Hollywood has been glamorizing this sort of effect for most of it’s scifi history, maybe some of the old writers have been tapping into the Akahshek.

I’m not a true believer in the 2012 thing, nor do I believe that the planet will die, however there is a very real possibility that human kind will disappear. Maybe we’ll be reincarnated as a cockroach?

Posted by John Schmaing at 7:45 PM