The Love of Liberty 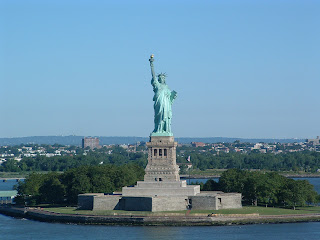 Independence Day is upon us. Our fair country is no longer a teenager and is reaching into the memories of the gods. We have been in existence as a country for roughly 234 years counting from 1776. Our fame to claim is our love of Freedom. We will do anything to preserve it and maintain it. We will even go abroad to ensure our freedom here at home, sometimes prematurely, but that is another story.


A few years back there was an obscure Sci-Fi movie about the preserving of our independence and the freedom of the world. It was called Independence Day, staring Will Smith, Harry Conic Jr., Jeff Goldblum, and Brent Spiner from Star Trek. This was an excellent example of our willingness to go all the way in order to protect our Liberty by killing all the aliens. Now isn’t that American?

I had an interesting conversation with a co-worker after he expressed his opinion about preserving our American Liberties. His opinion is that we should run all illegal aliens out of the country and imprison those that will not conform to the American way. I sat and listened intently for a short, very short, period of time. I then smiled at him, pulled the brim of my hat down, the one that reads “Crow Agency” on it, and asked him when he and his kind where going to leave the country. He looked startled and asked me what I meant. I said that depending how far back we take the conversation all the white folks that wander the countryside should go back to their European shores. He was taken aback and I laughed.

You see we folks of Native blood tend to take things very literally and have a great Love of Liberty. Freedom comes with a price, Liberty has it’s scares, and our shores have been bathed in blood. The love of Liberty isn’t just an ideal, it is a way of life, it is a path toward independence and peace, a way to forgive and accept all children born on this land for the past 1000 years. We are all Americans, every mother one of us. The sacred wheel has all the colors of man on it, now deal…