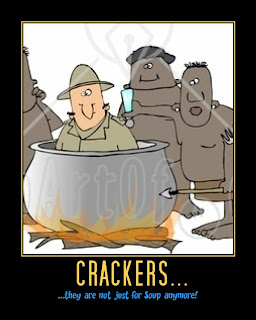 Yesterday’s blog got me thinking about cannibalism. In general it’s a practice to avoid, but there have been times in history when the practice has arisen out of necessity. I’m thinking of the Donner party way back when and various other examples of extreme need. However, the practice in general has intrigued me almost as much as the zombie phenomena.

Many tribal cultures from various continents have practiced cannibalism as a way to steal their enemy’s power. They would eat the flesh of the vanquished foe to gain their strength and power. If you watch old movies, as Romona and I do, you find many examples of the culinary practice. Abbot and Costello for example had a few run ins with the occasional cannibalistic tribe. There is an old movie staring David Carradine and Eli Wallach, along with a few others, where Eli was standing chest deep in a big pot waiting to be boiled in oil. Now, in the movie there are no other people in the scene the cannibalism is implied.

I wonder what a cannibal will be named, possibly George or Fred, whatever the last victim’s nametag stated. Possibly a tribal name of intrigue such as Leg Bone, or Fingers, hmmm the possibilities are endless.

Posted by John Schmaing at 6:19 PM